Shop Prints
You are here: Home / Archives for Canada

I have just completed one week on Sable Island (Nova Scotia) as part of my work as a research zoologist/photographer. Today we (5-person team) are hoping to leave the island. I had intended to create a blog during my stay, with images, but we have had issues with the internet. So, I am going to create the blog post-trip. Here is day one.

Since our intended departure on the 18th June, fog on Sable has delayed our departure. Each day, we have been on standby waiting to see if the fog clears. It is a strange mindset to be in; on the one hand your mind is already on the island, while on the other it is at home waiting to be engaged. The key is to focus your mind on where you are and continue as is until the situation changes. And it did, on the 21 June.
Once again we were on standby in the morning, but in the early afternoon the fog had cleared on the island and we were set to go. After dashing home and packing up the car with gear, we were back on standby, the fog had rolled back in, and then the flight was cancelled for the day. I unloaded the car and was about to continue my work when I received another call, the flight was back on and I was to go to the airport.
When I arrived at the airport I learnt that although the conditions were not great we were going to give it a go in the hope that the fog cleared long enough for us to land and for the plane to depart. On route we passed through stands of fog but as the island came in to view (always a marvellous sight) the fog was gone and the island was clear. We landed, removed our gear from the plane and less than an hour after the plane departed, the fog rolled back in and closed us off.

In the practice of Miksang (contemplative photography), there is a phrase called ‘fresh perception’. To the practitioner, this is an experience that occurs when the mind is very calm, free of the train of thoughts, yet the eye is wide open. In this state of mind, perceptions are quite raw and lucid, the ‘capture’ process is usually very tight and clean, and the image feels ‘fresh’. This happened to me last night during dinner. I was sat by a window and looked out and saw this image. I excused myself, grabbed the camera, took the picture and then returned to dinner. 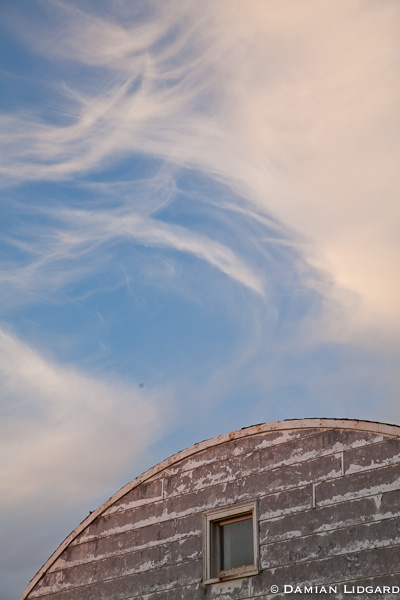 “Bend the rules and play tricks with the mind; make documents of moments that have never existed.” – Peter Funch

When these moments occur I find they are full of humour. I really enjoy finding them.

“There is a crack in everything – that’s how the light gets in” Leonard Cohen, Frederic Lezmi.

Two quite different views, one of a broken ladder taken in an old light house in Cape Breton, and the other a scene at a christening in Hove, UK.

“There are those who take photographs arranged beforehand and those who go out to discover the image and seize it. For me the camera is a sketch book, an instrument of intuition and spontaneity, the master of the instant which, in visual terms, questions and decides simultaneously.”

This photograph was taken while waiting for the start of the run ‘Not Since Moses’ in the Minas Basin, NS

“To take photographs means to recognize-simultaneously and within a fraction of a second-both the fact itself and the rigorous organization of visually perceived forms that give it meaning. It is putting one’s head, one’s eye and one’s heart on the same axis.”

“Play photographic poker. Look for a pair, two pairs, or three of a kind.” – Siegfried Hansen.

I took this photograph while watching the Canada Day parade.